It is often suggested that Labour is profligate and the Tories are the naturally ‘safe pair of hands’ when it comes to running the economy. The Tories, it is presumed, do not borrow as much as Labour. This is a hypothesis I have tested before. I thought it time to update to the end of the 2020/21 financial year.

The analysis that follows is based on government borrowing as reported by the House of Commons Library and other data supplied by the Office for Budget Responsibility.It covers years since 1946, which is the entire post-war period.

The government in office was decided by who was at the end of a financial year.

I then calculated the total net borrowing in Labour and Conservative years and averaged them by the number of years in office. All figures are stated billions of pounds in all the tables that follow and in this case are in original values i.e. in the prices of the periods when they actually occurred:

The Conservatives borrowed more, not just absolutely (which is unsurprising as they had more years in office), but on average.

This, though, is a bit unfair: the value of money changes over time. So I restated all borrowing in 2021 prices to eliminate the bias this gives rise to. This resulted in the following table:

In current prices the Conservatives still borrowed more (much more) overall, and on average, by a long way.

So then I speculated that this may be distorted by events since 2008. That is what the Conservatives would claim, after all: they would say that they have spent eleven years clearing up Labour’s mess. So I took those years out of account and looked at the first 62 years of the sample. I did this in 2021 prices to ensure I was applying a level playing field by eliminating inflation from consideration: 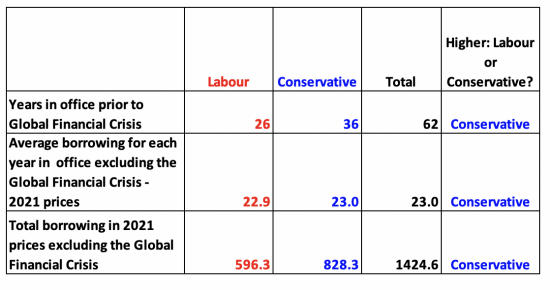 The Conservatives still borrowed more, after all, although it was a close run thing.

Then I speculated that this might be because Labour are good Keynesians: maybe they repaid national debt more often than the Conservatives. Or, to put it another way, they actually repaired the roof when the sun was shining. This is the data in terms of number of years:

Labour do walk the talk: they repay national debt much more often in absolute and percentage terms than the Conservatives. In fact, one in four Labour years saw debt repaid. That was true in less than one in ten Conservative years.

But maybe the Conservatives repaid more. I checked that. This is the data in both original and current prices: 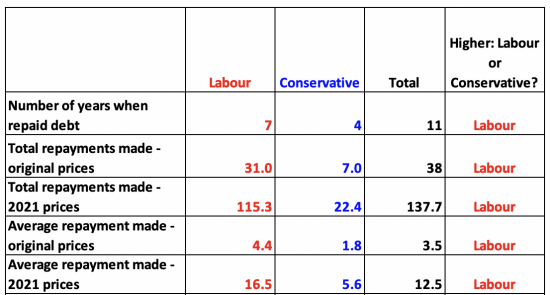 Labour not only repaid more often, it turns out: it also repaid much more in total and on average during each year when repayment was made.

So what do we learn? Two essential things, I suggest.

First, Labour borrows less than the Conservatives. The data shows that.

The trend does not vary however you do the data. I have tried time lagging it for example: it makes no difference.

Or, to put it another way, the Conservatives are the party of high UK borrowing and low debt repayment contrary to all popular belief.

For those interested, this is the overall summary table: the pattern in the right-hand column is really quite surprising: 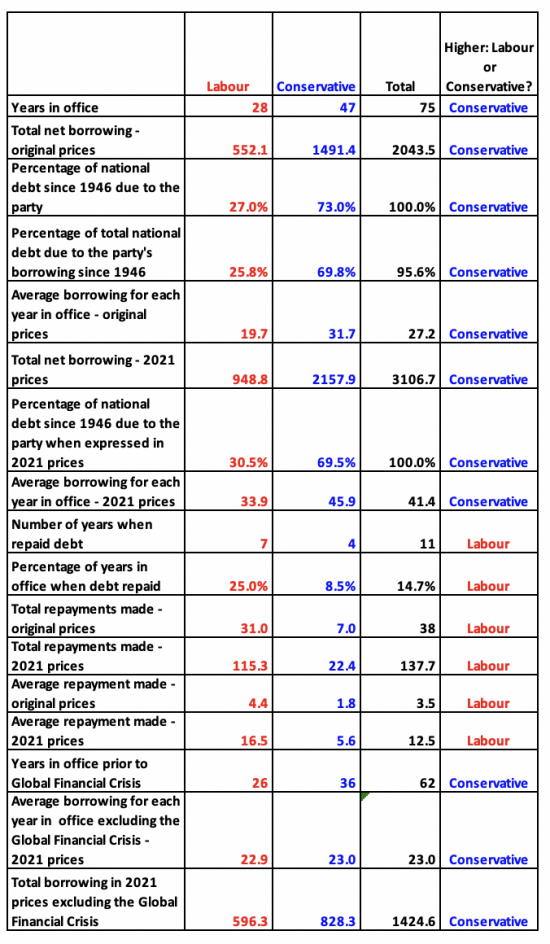 The pattern is very apparent. But so too is something else, and that is that no government since 1945 has really known how to cut spending enough to ever really cut the national debt. National debt repayments amount to about 4% of total borrowing in this period. That is completely insignificant and appropriate: the economy needs the money that the government injects into it by deficit spending to function.

However, there are increasing noises being made about austerity and the need to ‘repay the debt’, even though it is very apparent that politicians have no clue how to do this, and have no track record in doing so. Why are they in that case claiming the need to do something that has never happened, and likely never will? What is this wholly unnecessary distraction about? And why do we need to suffer austerity in the forlorn hope that debt might be repaid when it is apparent that not doing so has not caused harm, but the attempt to make repayment has?

Surely it is time for some politicians to call this out and say the claim that debt repayment is a priority is simply wrong, because the evidence shows that to be the case.

The basic data on borrowing came from the House of Commons Library. This data is updated over time: figures will differ from earlier versions of this blog.

All other data comes from the Office for Budget Responsibility using the May 2021 data set.

This article is written by Richard Murphy, taxresearch.org.ukpublished under a Creative Commons Attribution-NonCommercial 3.0 Unported License

The life of Boris Johnson – showing his lies, tyrrany, sexist,...

This network is non profit. No ads! Helping to empower communities through hyperlocal citizen journalism.